Another Ross-shire school – Dingwall Academy – also scored highly, coming fourth.  All of the Highland schools won awards on the night, recognising excellence in various aspects of the competition, such as community participation and inclusion. 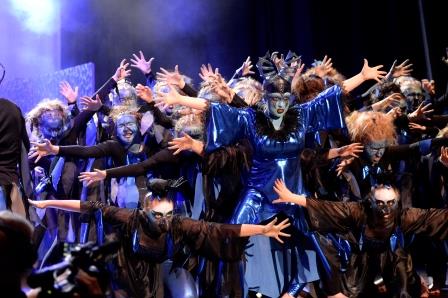 Two of the five Highland teams were the winners from the heats held at Eden Court in Inverness in April – Alness Academy and Invergordon Academy.

Three other teams qualified with ‘wild cards’ from the heats, as the judges identified them as being amongst the strongest performing from across Scotland – Thurso High, Dingwall Academy and Millburn Academy.

Caird Hall was sold out for Friday’s performance, which involved eleven schools from across Scotland.  Each school had 4 minutes to get their set on to the stage, and then 8 minutes to show off their dance prowess to the judges and large audience.

Having been the highest Highland-placed team at the Scottish Final in previous years, coming fourth in 2015, this win marked Alness Academy’s sustained success in the competition.

Head Teacher, Laura Gordon said: “I’m very proud of our young people and staff.  We must recognise the immense work put in by our staff, youth team and others over the years.  Their effort, commitment, hard work and belief have won out at the end.”

Highland Council’s Director of Care and Learning, Bill Alexander said: “Twenty Highland schools performed in the heats at Eden Court, showing the depth of talent across the authority, and the incredible support of parents, volunteers and staff.  More than 1,000 young people were involved over three nights, and all of them had been rehearsing for months before.

“It was enormously encouraging that five of our schools qualified for the Scottish Final in Dundee.  It is just fantastic that Alness and Dingwall did so well, and all of our schools performed tremendously on the night.”